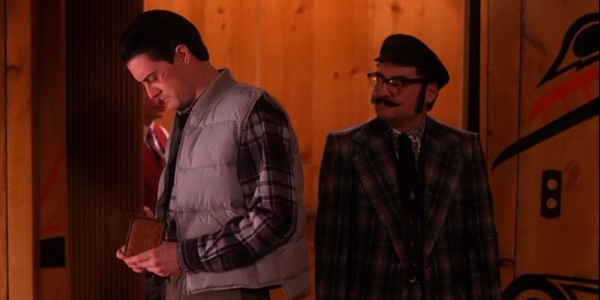 As the second and final season of Twin Peaks approaches its climax, a welcome dark cloud begins to gather over the town (and houses of seductresses beyond), as for the first time since Leland died we are treated to a dark episode with some of the odd touches that made the show so great in the first place.

The series still has a few bumps in the road ahead of it but now Windom Earle has arrived the wound that was left by solving Laura’s murder has begun to heal, but like most wounds there will always be a scar. Episode 22 divides opinions among fans, and while I wouldn’t say it falls in the truly classic category of the Twin Peaks canon, I would say it’s the best instalment since Leland’s passing and doesn’t deserve to be written off as a lesser episode, if at least for bringing the feel of the old show back tough maybe not as much of the substance.

Throughout there are constant reminders that Earle and Cooper‘s chess game has moved beyond a battle of wits and that real lives are now at stake. It begins with the camera slowly moving through the pieces on a darkened chess board and the imagery of these pieces are used like that of the wind blowing through the trees and the red traffic light in-between scenes to give us the sense that trouble is lurking. Just like when we didn’t know that Leland killed Laura and thought that there was a chance of Bob killing again, Earle’s evil game brings the same sense of danger back to the show.

Earle isn’t the only one with blood on his hands and this episode thankfully ties up James‘ whirlwind relationship with Evelyn. Just the right amount of time is spent on James and Evelyn as the regrettable subplot reaches its conclusion. As Donna and James debate what to do in Wallie’s, we’re treated to one of the first random yet memorable visuals, a line of police officers at the bar, heads all pointed in the same direction and turning in unison to greet another officer that walks in.

The explanation for the police being there in the first place, their uniforms distinct form the more earthy tones of the Twin Peaks local law enforcers, could be the trail that Windom Earle has left to Twin Peaks, but their odd actions stick out as a decidedly Lynchian touch with one time Peaks director Diane Keaton doing a good job of matching the tone of the series’ classic episodes. For the first time, the scenes with James and Evelyn feel like they’re connected to the rest of show, though like the Little Nicky thread they’re all the better because we know that this particular plot is nearly done.

The main attraction of Episode 22 is of course Windom Earle. After his on screen introduction in the previous episode we are treated to plenty of Earle as we see his dastardly plan begin to unfold. Say what you like about the latter half of Twin Peaks‘ second season and its flaws, but Kenneth Welsh’s performance as Earle is definitely one of the highlights of the series as a whole. Like some kind of anti-Cooper, there’s a sense of fun that surrounds Earle even if his actions are deplorable. At times it seems over the top, especially some of the disguises, but that’s part of the reason I like it. Some may criticise his various guises but it seems no more ridiculous to me than Cooper throwing rocks at bottles while trying to solve a murder and is just part of his quirky personality. Once again playing his wooden flute, which doubles as an instrument of torture, the effect might not be perfect as it’s kinda obvious that it’s not actually Welsh playing it (much like Jerry’s harmonica playing later on), but it’s effective nonetheless. After using it to bring Leo to the floor, he slaps a shock collar on him which will prevent, as Bobby Briggs calls him, “Leostein” from escaping. Meanwhile, Albert Rosenfield makes a welcome return to deliver evidence relating to Windom Earle and later treats Cooper to a sideshow that suggests that it was Josie who shot him the night the mill burned down. It’s not one of his funniest spots on the show but his entrance, where he vigorously hugs and pats Harry on the back, along with his spot on impression of Gordon Cole, and amusing comment on Cooper’s “muted earth tones”, are still memorable. The evidence he brings leads Cooper and Harry to question Josie and we’re treated to another odd visual as Cooper gives Pete a hand with his dry cleaning. Cooper walks through the swinging door of the kitchen to talk to Pete but the door doesn’t stop swinging, or slow down, for the duration of their conversation. It’s another touch that’s meaning is ambiguous but is just enough to puzzle the audience and leave us with the feeling that there are still strange forces at work.

Outside of town things wind up for James and the short but seduction-filled chapter of his life, so do things get resolved over at the Great Northern with Benjamin Horne. Still in the throes of his madness, everyone is now tired of it, even Jacoby who at first seemed to be enjoying the experience, and the Dr decides to initiate the “Appomattox Scenario” where he tries to reverse the outcome of the civil war to cure Ben. Employing Jerry, Audrey and Bobby Briggs to play the various roles necessary to stage a civil war re-enactment where Ulysses S Grant was the one that surrendered rather than General Lee. The climax of this particular subplot is quite amusing and while it’s good in one sense, in another it’s not so good as it means we now have to go through, the perhaps worse, “good Ben” storyline. It’s also worth mentioning that Johnny Horne makes a brief and rare appearance in these scenes but it’s not drawn attention to.

As far as the love story between Ed and Norma goes the couple get some of their best scenes together as they finally make it to Ed’s Bed, engaging in some heartfelt pillow talk before Nadine joins them. For now she’s OK with the situation, telling Ed that she doesn’t mind as she plans to pursue her relation with Mike. The emotion between Ed and Norma is as sweet as Nadine is funny and it’s a nice moment in an otherwise dark episode. It’s also representative of what this episode brings back to the mix, scenes which are either emotional or dramatic, but are contrasted with a comic element (such as the scene with Donna and James at beginning where she keeps getting interrupted by the waiter despite clearly talking about someone being murdered) without becoming too serious or too funny.

Topping off, in my opinion, a fairly successful episode, Cooper returns to his hotel room missing Windom Earle in disguise as he steps out of the elevator, which on the one had is funny because it’s so absurd and on the other is inconsistent with Cooper feeling Earle’s presence in the previous episode. If you can overlook that indiscretion the next scene is much more enjoyable, as waiting for Cooper in his room is a death mask of Caroline left by Earle with eye sockets eerily glowing, and when Cooper picks it up a recorded message, on his own dictaphone, starts playing. It’s an eerie moment and adds to the weight on Cooper’s shoulders as the message tells him it’s his move. Despite the Major not making an appearance the progression of the Earle storyline is enough to make this a sufficiently interesting episode.

In these later episodes there are several clunky moments where things feel a little too coincidental or convenient and there are certainly a few in this one (especially the revelation of Pete as a chess genius), however if you can overlook these they become a lot more enjoyable. It’s easy to keep going on about the creators being forced to reveal who killed Laura, but all of the show’s problems stem from that mistake and this episode does a better job than most of patching up the sinking ship.