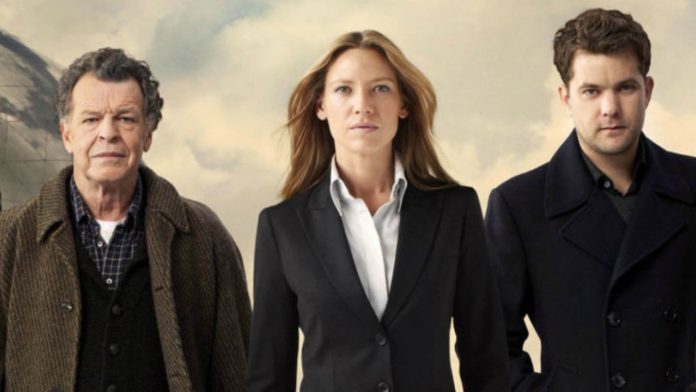 We’ve already posted our review for the Fringe Season 3 finale – “The Day We Died” – along with our light-hearted Q&A guide to the events that took place, but we’ve created this additional analysis offering our more focused and detailed interpretation of the ending.

The Fringe Season 3 finale caused a mixture of emotions from fans. Some were left excited and energized from the possibilities. While others felt bemused or even betrayed, believing the story they thought they were following had been pulled out from underneath them.

To help those of you still confused by aspects of the finale, we’ve provided this guide that will hopefully prove useful, or at least serve as a basis for further discussion.

To keep things structured, we’ve arranged the guide into three parts. You can skip to a specific part if it holds more interest to you, by using the links below. Otherwise feel free to read on.

The Rules of Time

In order to fully understand the events that took place, it’s worth outlining the established boundaries of time and what is and isn’t possible. One of the most asked about questions is why Walter didn’t stop himself from sending the Machine back through time, thus preventing Peter from using it to destroy the alternate universe. In 2026, Walter explains by telling Peter that he has no choice but to send the Machine back millions of years in the past through the wormhole, because he’s already done it – it’s already happened.

This confirms that our characters are inside a time-loop. In other words: the events we’ve witnessed throughout the first three seasons of the show are repeating, and probably have been for some time. Walter (one of the principle First People) has already sent the Machine back in a previous loop, which has lead to the events up to 2026 and the very realization that he was the one who sent it back. So, he can’t undo that decision.

Furthermore, he knows that he’s bound to send the Machine back again – because something will compel him to do so – thus creating another iteration. Just as William Bell once told Peter: “when one walks away from his fate, it leads one directly to fate’s doorstep”. That is to say: nature has a way of course-correcting to ensure that previous events within the time-loop continuum end up happening again. Just as Peter wound up going inside the Machine, despite his determination not to, Walter always ends sending the Machine back.

However, Walter explains that Peter can change what happened by making a different choice within the cycle of events that have already played out. Why? Because Peter shares a unique relationship with the one device that has to power to create and destroy. It was his Machine-powered choice that  led to the events in the current time-loop (and possibly many previous time-loops). Therefore, making a different choice, in the past, will lead to a different outcome.

This would mean that the future depicted in the finale wont actively play out, allowing them to “cheat time”. In order to do this, Walter needs to find a way to let 2011 Peter see what will happen if he makes the same choice he repeatedly makes at that moment in time. It’s an easy enough concept to grasp, if we consider how we might act differently if we could see the future results of our choices.

While we don’t see the mechanism by which Walter brings Peter’s consciousness forward in time, we know that he finds a way – as illustrated at the end of “The Last Sam Weiss”, Peter’s consciousness jumps forward to the future he is about to set in motion. The glimpse into the 2026 continues throughout most of “The Day We Died”, as both the audience and Peter see the outcome of the choice he already made.

This convergence of past, present and future consciousness allows Peter to witness the negative consequence of his actions and make a different choice by using the Machine’s power to create a bridge between the two universes. Saving both.

However, Future Peter and Walter realize that that there would likely be “repercussions” for cheating the rules of time. In a moment of poignancy it dawns on Walter that: “there is no way of telling what the cost might be.” However, he quickly decides that: “it can’t be worse than this”.

It is at this moment where Peter’s glimpse into the future comes to an end – his 2026 vision has spanned days, but only 60 seconds have past in linear time.

Think of a timeline as a sequence of events in linear form – one that is repeating, therefore creating the time-loop we’ve mentioned. Within the timeline exists the show’s universes – we have ‘over here’ and ‘over there’ (and possibly many other universes), where the characters experience time in a linear fashion: past > present > future.

The truth is that all of time is occurring simultaneously – past, present and future are happening all at once. In “The Firefly”, September explains this by telling Walter that while he knows all of the possible future outcomes, he doesn’t know which will come to pass. This is because within the framework of events that have already happened in the time-loop, there are moments where freewill can change the direction of the timeline, creating a new conscious experience.

This is what happens when Peter makes a different choice in the Machine after seeing the mistake he repeatedly made in previous iterations of time. By joining the two universes he activates a new branch in time and changes the course of history.

Remember, since time is happening all at once, the future that Peter saw continues to play out in, some sense, because it has already happened. What he has now done is decide to branch the timeline off into a different direction. The future he glimpsed now becomes what I like to call “Phantom timeline” – a possible future that exists along with all the other ‘possible’ futures – that is no longer being actively experienced on a conscious level.

There’s a clue in Olivia’s last line, where she says: “we’re here now”. Think about what that means. To me it’s a character saying that they’ve moved to a new place, they’re taking a different path than the one they’ve been endlessly caught up in. While she’s not aware of this context, it’s reasonable to take this as the underlying message.

This new place – or timeline, now becomes the active timeline because Peter has joined the two universes, and by doing so has instantly changed the conditions of the timeline.

utcomes to both questions. This is a cliffhanger that is supposed to have you asking questions about the nature of fate, freewill, and existentialism.

All three concepts run heavily throughout the finale, as we witness Peter apply his freewill to crash events that have already played out. Seconds after bringing a new path of time into existence, Peter himself ceases to exist. This is arguably a powerful and potent move that gives the audience the opportunity to view the story with new eyes.

September is right, Peter no longer exists. But I am also certain that he’s speaking in relation to the characters who no longer remember him. The audience knows that Peter exists in the now ‘phantom’ timeline because we saw him sacrifice himself (perhaps unwittingly) to make a different choice. But here is where those “repercussions” that future Walter and Peter talked about come into play – by bringing about this ‘new’ future, Peter essentially deleted himself from the active timeline. History and the other characters in this timeline don’t remember him because, from their linear experience of time, he was never there. He was never born.

Peter didn’t just change the present and the future when he joined the two universes. He changed the past, present and future. Remember, time is happening simultaneously, therefore Peter’s act of bringing the two worlds together changed the conditions of the timeline in all directions. While it is left intentionally ambiguous as to exactly why Peter can’t exist in this timeline, it’s reasonable to assume that the new conditions that he brought into existence (including those that ripple back right to the beginning of time itself) are no longer viable for his own existence. He out loop-holed himself.

It’s possible that the Machine to which he was uniquely attuned no longer shares a connection with him. After all, if he doesn’t exist, then it stands to reason that the Machine would have another purpose, or a connection with someone else – especially since the Machine is still in the room before we cut to the final scene. It’s a kind of reverse way of thinking that given the true nature of time lends itself to making sense of the situation.

So, as September said: Peter served his purpose. A remark that implies Peter’s fate was always to bring the two universes together at some juncture. In 1985 September made a mistake which led Walter to cross over and take Peter from the alternate universe. This interfered with the natural course of events – events that have possibly repeated in many loops of time.

By preparing Walter to sacrifice Peter and by observing key moments in time, the Observers (namely September) have quite possibly reset the imbalance – or taken the timeline to a place where they believe it needs to go. One of the recent episodes, “Stowaway”, helps inform this idea: Dana Gray is unable to die because she hasn’t fulfilled her purpose. The very moment that she does, she dies. And so it goes. Many stories are built on this premise.

Some people have asked how other factors can remain so consistent without Peter – the other characters, the warring universes, etc. This can be explained by entanglement. History repeats itself – even if a particular aspect is removed, it’s fairly reasonable to think that events could still unfold in similar ways.

Especially in a story where some things are just meant to happen, where nature can intervene to course-correct those comic ‘hiccups’. And that’s the question: fate vs freewill and how much of each is an illusion? Is there really freewill within a circular system? At what price does freewill exist? What does it mean if the world can end up almost the same without our presence? What does that say about existence? These are some of the questions that we are left with.

But I know that you also want to know where Peter is. The truth is, it really is anyone’s guess. Based on the thoughts I’ve laid out in this guide, I’d say that Peter is stuck in another timeline somewhere – or possibly another universe within the active (or Phantom) timeline. But I also wouldn’t rule out the possibility that Future Walter and Peter planned for this to happen for whatever reason.

Here are a few other considerations

Did William Bell have more knowledge about the existence of the time-loop, given that the alternate universe Machine was based on his design?

Why are the two universes still at war?

Do you agree with our interpretation of the Fringe Season 3 finale ending? Have a different take on what happened? Have any related thoughts or questions?