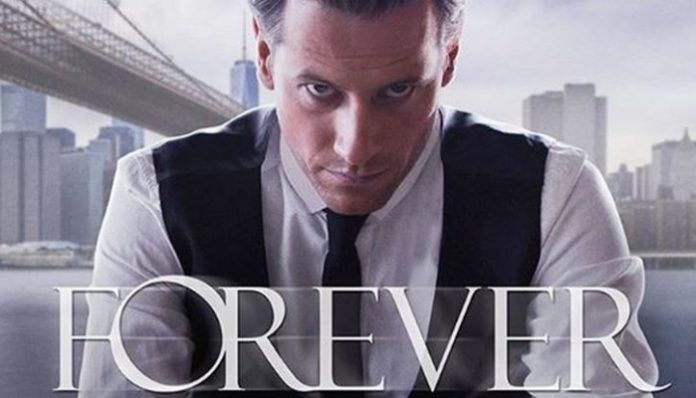 Forever Cancelled Or Renewed for Season 2?

Official Status: Forever Cancelled By ABC After One Season

Forever premiered Monday, September 22, 2014. . Bookmark for latest updates! Stay tuned to this page for continued updates on the cancel/renew status of ABC’s serial-procedural as it seeks Season 2 immortality. May 6, 2015 – Matthew Miller has pitched Forever Season 2 to ABC and believes the show’s faint renewal chances hinge on ABC’s new shows and schedule plans for next season (not to mention ratings considerations).

May 3, 2015 – Forever might be on the brink of cancellation, but series star Judd Hirsch believes, narratively speaking, the show could continue for “an enormously long time, if given the chance.

April 8, 2015 – Forever wraps filming on Season 1 with the show’s fate to be revealed in May. Series creator Matthew Miller is hopeful for Season 2, but Forever remains on course for cancellation, barring a miracle.

April 1, 2015 – Forever boss Matthew Miller promises to resolve the Abigail mystery arc by the end of Season 1, in what could be construed as preparing the show for likely cancellation by wrapping up key loose ends. Time will tell.

March 25, 2015 – Forever sinks to a series-low equally 0.9 key demo rating. At this stage of the season in particular, that looks fatal as far as Season 2 goes.

January 14 – Some encouraging news for Forever, as top-rated French network TF1 acquires rights to the series, increasing the show’s exposure and financial viability. With Forever’s future uncertain at ABC, the show can use all every shred of positivity to keep its unlikely Season 2 renewal hopes alive. December 10 – Forever EP Matt Miller confirms plans for Season 2 and 3, and says he has ideas for how he’d like to end the show.

November 7 – Forever‘s survival chances are boosted as ABC orders it to full season.

September 24 – Forever builds on its ‘special preview’ with a 1.8 in Episode 2, beating CBS’ Person Of Interest (1.7), making for an overall positive start.

September 23 – Forever gets off to a worrying start, drawing 8.3 million viewers with a 1.5 rating | Forever adjusts up to a 1.7 in the finals, things already look a bit better.

September 22 – Forever boss Matt Miller confirms he doesn’t have a projected end date for the series.