Constantine Cancelled Or Renewed for Season 2? Stay tuned as we bring you continuous updates on the cancelled/renewed status of NBC’s supernatural drama series based on DC Comics’ Hellblazer.

Current Status: Constantine premiered Friday, October 24, 2014. NBC has yet to cancel or renew Constantine for Season 2. Watch this space for ongoing updates!

Constantine cancelled or renewed for Season 2? Let’s find out…

March 9, 2015 – With a renewal decision still pending, exec producer Daniel Cerone talks up the time-slot performance of Constantine vs NBC’s airing of a Law & Order repeat, which scored a 0.6 key demo rating, below Constantine‘s average:

March 6, 2015 – NBC cancels Allegiance after five episodes, a move that could open the door for Constantine Season 2. Although both shows had similar ratings, NBC might see Constantine as having a bigger genre and brand appeal. Publicly at least, the network is keeping Constantine on the table until it sees how its new pilots are shaping up.

February 19, 2015 – Daniel Cerone says he will pitch Constantine Season 2 to NBC in May, after which they will make a decision on whether or not to renew the show. In the (likely) event of cancellation, Cerone is hoping to continue Constantine Season 2 on another network or platform, and stresses the importance of digital/overseas viewership — through legal means — in improving the show’s chances of staying alive.

February 16, 2015 – Harold Perrineau says he has no inside information on the Constantine Syfy rumor, though he’s on-board “wherever it goes” and doesn’t get the feeling that the end is near.

February 14, 2015 – Matt Ryan says he’s only heard the same as everyone else when it comes to the rumors of Constantine Season 2 possibility moving to Syfy, but he does seem open to the idea “if it means  that we get to continue exploring this world with these great characters and great stories.”

February 13, 2015 – Constantine ends its first season on a cliffhanger, increasing the need for that all-important Season 2 renewal.

February 13, 2015 – Despite Syfy throwing ice on rumors that it’s in talks to save Constantine, showrunner Daniel Cerone seems confident that there’s life in the show yet, tweeting “Reports of our demise [are] greatly exaggerated”:

February 13, 2015 – Syfy senior exec Ted A’Zary says he’s heard no discussions about Constantine possibly moving to Syfy and is unable to verify the validity of the rumor:

February 11, 2015 – Showrunner Daniel Cerone says he’s not involved in any current plans to move Constantine from NBC to Syfy for Season 2, but seems very open to the idea. 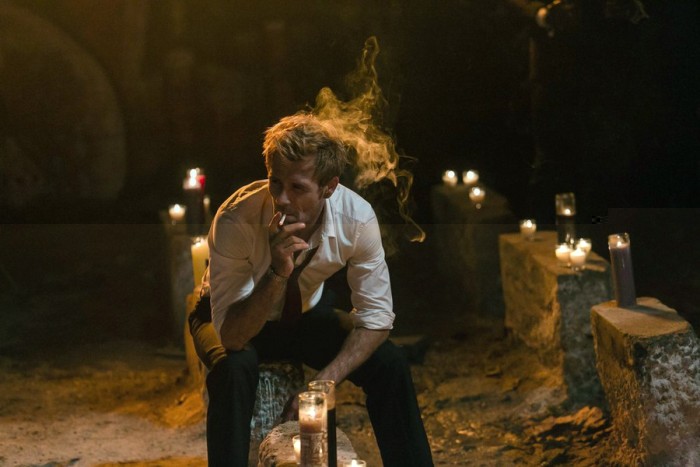 February 11, 2015 – Salvation for Constantine? NBC planning to move Constantine Season 2 over to Syfy, where it will be rebranded as Hellblazer, according to reports.

February 5, 2015 – NBC renews five dramas and Constantine isn’t one of them. It doesn’t look good for the show, though the network has yet to officially rule out Constantine Season 2.

February 3, 2015 – Constantine co-creator Daniel Cerone hopes to extend Anne Marie’s arc in Season 2 after not having room for it in Season 1, per Comic Book.

January 25, 2015 – Executive producer Daniel Cerone reiterates that despite his wishes there’s no word on Constantine Season 2 yet. Perhaps ominously, he notes that he’s “just grateful” that NBC will air the entire first season.

January 19, 2015 – Exec producer Daniel Cerone says it’s too early to talk about a new home for Constantine, while urging viewers to keep watching and supporting the show.

January 17, 2015 – While noting that Constantine is still being talked about for renewal, NBC president Jennifer Salke expresses doubts about the show’s future.

January 16, 2015 – NBC say they’ve yet to give up on Constantine despite its low ratings, and insist that the fate of the supernatural drama is “still up in the air”, with Season 2 a possibility, heading into the final four episodes of Season 1.

December 25, 2014 – NBC will now wait until spring 2015 (rather than the previously stated January) to make a renewal decision on Constantine. This would keep Constantine ‘in the hunt’ for at least a month or two after its Season 1 finale, though it also highlights that the show’s fate is not in its own hands (irrespective of any marginal ratings bumps), as the network will look to see how its fall pilots are shaping up before making a call.

December 19 – Constantine shifts timeslot from 10/9c to 8/7c upon its winter break return on Jan. 16. Perhaps a last chance for the show to stake a claim for Season 2.

December 18 – Series star Matt Ryan expresses hope and confidence that Constantine will be renewed for Season 2, while confirming that the Season 1 finale will serve to set up the show’s continuation.

November 29 – Like most shows on Black Friday, Constantine takes a hit in the ratings. EP Daniel Cerone advises fans not to fret and continue watching the show, with the upcoming weeks crucial to any chance to show may have of being renewed.

November 28 – Cerone confirms that the Nov. 28 episode was originally intended as the second episode, but was moved back when Lucy Griffiths was written out of the show. With a second season far from certain, airing an episode out of sync – and thus breaking the show’s serialized continuity – wont help the shows renewal chances.

November 24 – Constantine EP Daniel Cerone is confident the show will be renewed for Season 2, and urges fans to continue watching/streaming despite news that NBC wont be ordering additional episodes.

November 24 – Constantine will end its first season run with 13 episodes after NBC opted not to pick up the back-nine episodes. While this casts further doubt over the series’ renewal ambitions, the show is reportedly still ‘in contention’ for Season 2.

October 9, 2014 – Positive news for Constantine as NBC orders extra scripts ahead of the series premiere.

July 11, 2014 – Months ahead of the series premiere, Lucy Griffiths exits Constantine after the producers decide to take the show in a different direction. Griffiths’ character played a major role in the pilot and much of the story was built around her character. The role will not be recast, but replaced by a completely different character, Zed, to be the series-long leading lady. It remains to be seen whether this will have a negative impact on the story, and in turn, the show’s survival chances.