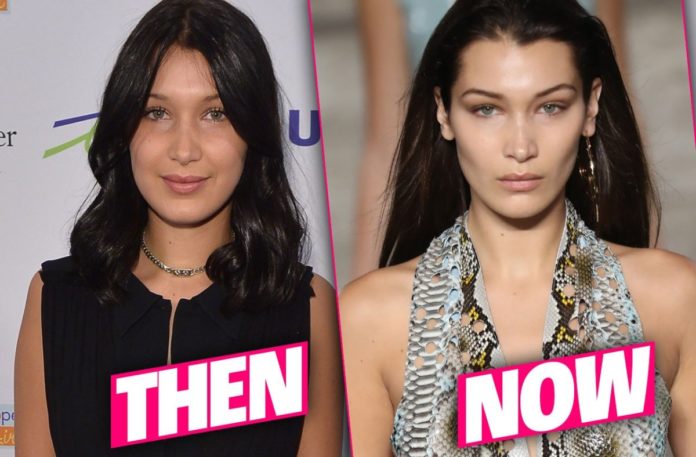 You would definitely be familiar with Gigi Hadid who surprised everyone at the 2014 American Music Awards that got everyone wondering who the beautiful faced lady was and a similar occurrence happened in the most recent Met Gala when Bella Hadid also showed up and got everyone saying “oh there are actually two of them”. 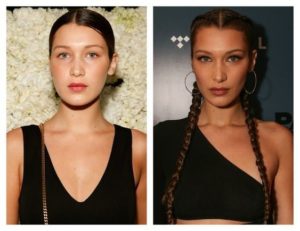 An early picture back in 2009 showed Bella Hadid with shiny, nice and light looking brows and by the time the star turned 14, she was already looking very polished and the surprising thing is, most teenagers at that age either had a bad hair, a bad skin or an awkward style but that wasn’t the case with Bella Hadid.

Bella Hadid always had this thing for natural looks and being constantly pretty and when the word natural comes into play here, the mind takes us straight to Bella’s nose which was as big an elephant. There was actually nothing wrong with her facial looks and the picture below explains it all; 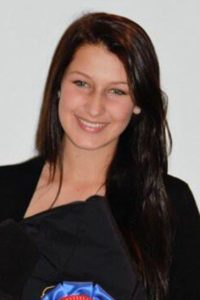 Fast forward to today, Bella Hadid now has a fuller upper lip and recent pictures showed she never smiled much that prompted rumors she didn’t want her face to be stretched out due to the surgical operation. There was also some evident changes in her nose that also suggested it must have been the work of cosmetic intervention. The nose didn’t actually become tiny if that is what you think but it actually had a redefined look.

Before her rise to stardom, Bella Hadid’s nose had a lump but after she found her way to stardom, the lump suddenly disappeared. This totally suggests that Bella Hadid must have had a Nose Job unless there is any theory that supports outgrowing a lump in the nose which we are not aware of. 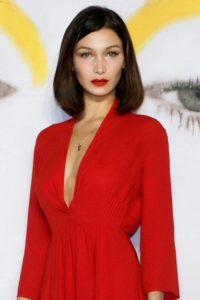 This recent picture of Bella Hadid shows us how stunning she looks now and its not just about her style or her new flawless skin but how unreal everything looks, how unreal the transformation looks. This got people thinking that the job was too perfect and it can make one guess it is a side effect of cosmetic interventions.

A plastic surgery transformation isn’t a bad idea because it has to be a personal decision. Bella Hadid’s transformation into a modern day Jennifer Lawrence was and still remains the best move for her as long as her career is concerned and it has made her look different from the average girl on the street and a pro in modeling.

Bella Hadid who has once been voted as the “model of the year” has been on the front cover of many magazines together with her sister Gigi Hadid who also model’s for Victoria Secret. Ever since Bella came into the spotlight, there has been an argument as to whether her looks are natural or based on plastic surgery transformation.